Our Lady of Peneda

Isolated Cistercian establishment, implanted in a valley surrounded with rocky mountains, near the border of Galicia. It is difficult to imagine that it sheltered a monastic life since the IXth century. The incorporation in the Cistercian Order occurred in the XIIIth century, not knowing exactly if the parent company was Sainte-Marie de Bouro or the Monastery of Sainte-Marie d'Oseira, near Galicia, the blazon of which appears on the gate of access to the monastic dependences. What stays of the group is near a brook. The church possesses a Romanic structure, although the head presents Gothic frescoes. On the stone of the main facade stands out the Maltese cross. Of the primitive convent remain a segment of arch and the wing bent at the support of the church, arranged along the bank of the river. It constituted the dormitory of the monks. In other wing we distinguish the space of the kitchen and a beautiful fireplace. The last monk of Cîteaux was the parishioner of the village of Pitões das Júnias, en 1834, date of the dissolution of the Religious Orders in Portugal. As historic curiosity, we shall mention that Pedro de Pitões, one from the main inspirators of the conquest of Lisbon to the Moors, in the year 1147, was ordered bishop of Porto in this monastery. If certain granite chaos remind Brittany, it's the same dolmens, or Celtic motives which we can see on certain monuments.

To see pictures of this magnificient site, please click here ! On May 13th, 1917, three children were pasturing their little flock in the Cova da Iria, parish of Fatima, town of Vila Nova de Ourém. today the diocese of Leiria-Fatima. They were called: Lucia de Jesus, aged 10, and her cousins Francisco and Jacinta Marto, aged 9 and 7.

About midday, after praying the Rosary, as was their custom, they were amusing themselves building a little house of stones scattered around he place where the Basilica now stands. Suddenly they saw a brilliant light, and thinking it to be lightning, they decided to go home. But as they went down the slope another flash lit up the place, and they saw on the top of a holmoak (where the Chapel of Apparitions now stands), "a Lady more brilliant than the sun", from whose hands hung a white rosary.

The Lady told the three little shepherds that it was necessary to pray much, and she invited them to return to the Cova da Iria during five consecutive months, on the 13th day at that hour. The children did so and the 13th day of June, July, September and October, the Lady appeared to them again and spoke to them in the Cova da 0a. On the 19th of August, the apparition took place at Valinhos, about 500 meters from Aljustrel, because on the 13th the children had been carried off by the local Administrator to Vila Nova de Ourém.

At the last apparition, on October 13, with about 70,000 people present, the Lady said to them that she was the "Lady of the Rosary" and that a chapel was to be built there in her honor. After the apparition all present witnessed the miracle promised to the three children in July and September :the sun, resembling a silver disc, could be gazed at without difficulty and, whirling on itself like a wheel of fire, it seemed about to fall upon the earth.

Since 1917 pilgrims have not ceased to come to the Cova da Iria in thousands upon thousands from all parts of the world, at first on the 13th of each month. later during the summer and winter holidays, and now more and more at weekends and any day all the year round. 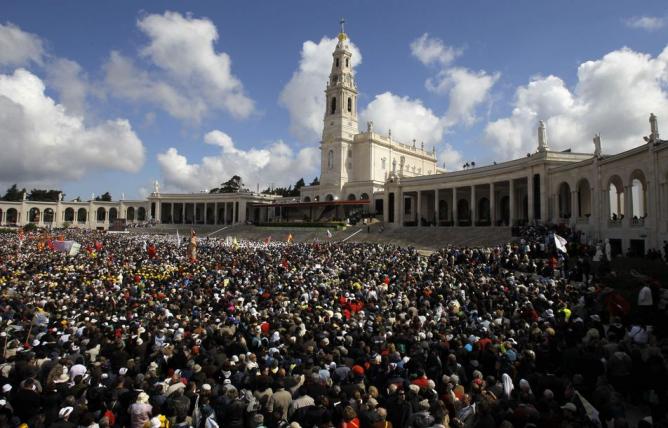 Magnificient palace of neoclassical style from the beginning of the 20th century. Its construction was ordered by Luis Pereira Velho de Moscoso. It consists in a remarkable palace surrounded by a shadowed copse, english-style gardens and consequent wineyards. Interior conceals sompteous rooms, precious paintings and very beautiful frescoes. A chapel and a theatre complete this group. The wineyards of this property breed the famous Alvarinho wine "Palacio de Brejoeira".

The gardens bring to this palace an exuberant surrounding. It is still privately-owned, but some parts of the buildings are open for visits.

To have a virtual visit of the Palace (in portuguese), click here ! 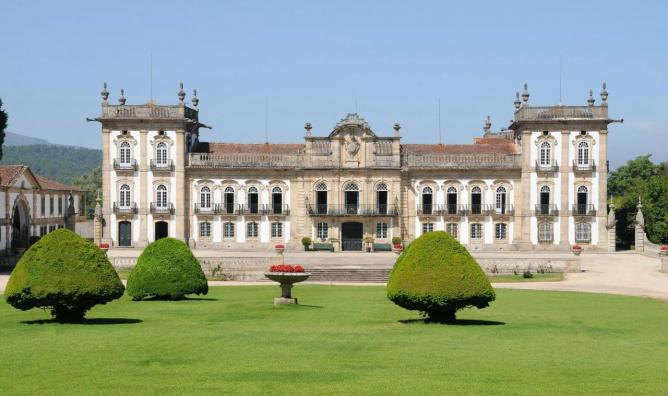 The fortress of Valença, small city on the left bank of the Minho river, on the way to Galicia, is dated between the 12th & 13th century. Its main purpose was to defend the city and the crossing of the river. Considered as the most important fortification of the Alto Minho, object of many interventions for the preservation and the restoration along the 20th century, the structures which remain are in good shape and open to the public. The place also groups many small decoration & artcraft shops and offers a magnificient panoramic view over the Minho river and the green mountains.

For more details (in portuguese) over this fortress, thanks for clicking here ! The Cathedral of Santiago is the end of the pilgrim's journey and its monumentality is worthy of such a deed. It is a key Romanesque work in which numerous architectonic styles converge.

The construction of the cathedral began in the year 1075, during the reign of Alfonso VI and was promoted by Bishop Diego Peláez. Work was carried out under the orders of maestro Esteban on the remains of old temples raised in devotion to the saint. It was built with three naves and a Latin cross plan, on a surface area of around 8,300 square metres. Its multiple extensions have increased the different architectonic styles in the building (Romanesque, Gothic, Baroque, Plateresque and Neoclassical). The Portico de la Gloria is the main entrance. It was constructed by Maestro Mateo in 1188 and houses hundreds of figures representing the Apocalypse. In it, the figure of the Apostle St. James appears to welcome the pilgrims from the Mullion, sustained on a column. The Obradoiro façade of the Cathedral was the work of Fernando de Casas y Novoa, and it is considered one of the greatest expressions of the Spanish Baroque period. The Main Altar is also in the Baroque style and the crypt of the Apostle St. James is located beneath it. 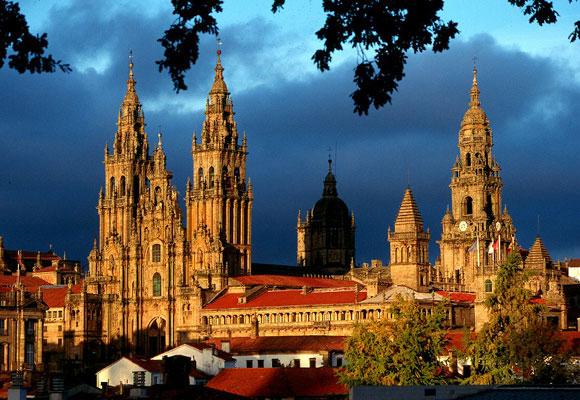